‹ Back Next ›
By Oliver Barker
Event

Made in North Korea

The Democratic People’s Republic of Korea has always fascinated me. In a global world where branding can be so influential, the DPRK has kept its distance. Just imagine a world without, Heinz, Nike, McVities and the like…though I suppose it’s a classic case of not knowing what you’re missing. I mean, we all love brands, right? (Don’t kid yourself, those own label chopped tomatoes don’t count.) In a highly competitive marketplace, branding and design is the foundation for success. Something forcing companies to strive to constantly be better; surely that’s not a bad thing for us consumers? But what if everything was designed by the state? What then?

The DPRK’s political system has been described by some observers as a ‘hereditary dictatorship’ and an ‘absolute monarchy’, so I ask; what impact does that have on your bag of crisps or tin or sardines?! I went to the House of Illustration in London to find out.

Nicholas Bonner (tour guide and expert on North Korea) shares his collection of FMCG designs, travel tickets, invitations, postage stamps, hand-painted propaganda and more. I came away with a rare glimpse into what North Korean life is like.

Due to the state’s structured training of graphic painters (in an attempt to ensure consistency), most of the designs feel identical. It’s almost as if the DPRK is the brand. There’s no variation and no choice. However, having worked on projects rebranding designs of beer/ale brands, I have to say that Pyongyang Beer wouldn’t look out of place in any craft pub in London. Though I’ve a feeling that none of their designs were tested in research… 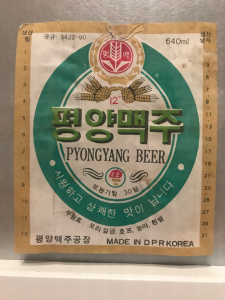 In more recent years, competition’s become established in many markets and technology is allowing hand-crafted designs to be replaced by digital imagery. There is a desire for the country to be seen on a level with foreign brands so much of the packaging is now characterized by flat block colour – as seen elsewhere in Asia.

Whilst it is all so intriguing, mysterious and insightful, I’m happy to know that in the UK there’s always a choice to make. There’s always a brand working harder or doing things differently.