‹ Back Next ›
By Oliver Barker
Brands

In a while, crocodile…

It’s not every day you see a brand do away with its logo. But, for the first time ever, Lacoste has done precisely that for an extremely limited edition collection.

Lacoste and creative agency, BETC Paris, recently teamed up with the International Union for Conservation of Nature (IUCN) to help raise awareness of, and funds for, endangered species. Whilst the famous Lacoste crocodile isn’t endangered, there are many species that aren’t as lucky.

Across the collection of classic white polos, 10 endangered species have individually appeared where the croc used to be. Not only that, but the number of polos in existence (for sale) of each species corresponds to the number alive left in the wild.

For instance, the Vaquita (porpoise) range offered only 30 polos (specimens). At the top end of the scale, there were 450 of the Anegada Ground Iguana shirts.

That gives us a total of 1,775 polo shirts across the entire collection. That knowledge certainly puts things into perspective. Not only is this partnership raising much needed attention to the #SaveTheSpecies campaign, it’s genuinely creating a buzz, a collector’s item and (most importantly) a dialogue about the cause. With every polo purchased, the money goes towards preserving that species in the wild. And it goes without saying, the limited stock was snapped up almost instantly; pun intended.

In the past, I’ve questioned whether corporate social responsibility is something that big brands are merely latching onto, rather than truly standing for something. Some attempts of CSR seem disingenuous and removed from the brand – essentially just piggy-backing onto someone else’s social work. However, I think this is a great example of how to get it right. Lacoste has created something relevant, worthy and important. This campaign certainly gets the Razor approval. And it’s only the beginning – the partnership will run for the next three years. Good work! 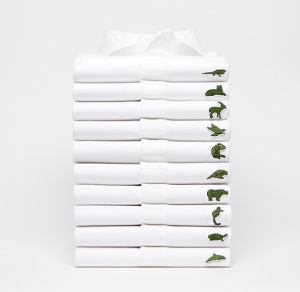