‹ Back Next ›
By Ollie Barker
Uncategorised

“Believe in something. Even if it means sacrificing everything.”

Whatever your stance on Nike’s latest campaign, it’s certainly made waves around the world. It’s hard to write this in an unbiased and non-political way because Trump is a c*ckwomble. But I’ll do my best.

In case you don’t know what I’m talking about, here’s the long story short:

In 2017, Kaepernick said, “I’m going to continue to stand with the people that are being oppressed. To me, this is something that has to change. When there’s significant change and I feel that flag represents what it’s supposed to represent, and this country is representing people the way that it’s supposed to, I’ll stand.”.

When Nike then named Kaepernick as the face and hero of ‘Just Do It’, backlash came from Trump and other pissed-off Republicans who’ve burned their Nike goods or cut the swooshes out of their clothing. But the fact is that many of those most upset were not core customers in the first place. 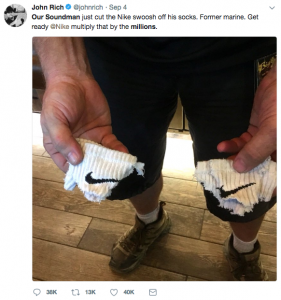 Taking any brand into the eye of a political storm is a bold stance. For Nike, it’s clearly been a deliberately divisive strategy; one that’s certainly paid off based on the latest figures.

When you alienate one group, you’ll appeal to another by default. 18-34 year olds are clearly the future target audience for the brand and this stunt has resonated with them. 50% of this audience told a Marketing Week survey that they now view Nike more favourably. 49% would even be more likely to purchase products from Nike in the future. Only 9% said they would buy less; does that sound like failure to you?

No doubt Nike will be here long after Trump has left The White House. And this campaign is a great example of when disruption and a cause can work for big brands.