‹ Back Next ›
By Razor Research
Uncategorised

Each month, we share with the world a flavour of what’s caught our attention and influenced our thinking and conversations in the office.

Chloë B
This week, I went to an AQR Spark event about mental health in the research industry. This is such an important topic of conversation and it made me so sad to hear that 85% of researchers have struggled with their mental state in the last year alone. The evening was hosted by Helen Stephens – a coach and mental health first aider. Helen did a fantastic job of running us through some of the main triggers that can lead to stress in a research agency. She also shared with us some coping mechanisms to consider when things seem overwhelming. I’ve written more about it here.

Chloë F
Bit theme-y this month. I’m about to start work on a project about the menopause and (perhaps coincidence or perhaps not) my two favourite things have been Elizabeth Strout’s new novel, Olive, Again and series 3 of Better Things. The writer of Better Things is also its lead actress and it’s the best show I’ve seen that explicitly deals with middle age. Searingly honest and seriously funny. Meanwhile, Olive Kitteredge goes through her seventies and eighties and the novel is unflinching when it comes to depicting old age. It’s beautiful and I wept every 20 pages or so. Two truly wonderful cultural experiences and both will help me sail into my next project.

Gem
Until this week, I’d planned to tell you about some of the Oscar-nominated films I’d watched (yawn and how predictable). But then I went along to Alliance – an MRS event jointly organised by MRS Pride and &more (the young researchers network). The inspiring line-up was a selection of young researchers and role models sharing thought-provoking stories and ideas on how to give a voice to the marginalised. Everyone spoke with the kind of passion that’s hard to not get swept up in. I’m not a member of the LGBTQ+ community but I was thrilled to be invited to listen to and discuss things that would simply never have crossed my mind before. (If you’re reading this, MRS, thanks for having us!)

Jill
Obviously, I’m reading another ginormous tome (The Age of Surveillance Capitalism seeing as you asked). But what I’ve really loved this month is our flexible working policy at Razor Research. We’re hitting our stride with what it all means; video meetings are now normal and work/life balance is *chefs kiss*. Although, perhaps I’m just very fond of it today as I’ve got my own research assistant. She’s terrible at PowerPoint but an expert at purring. 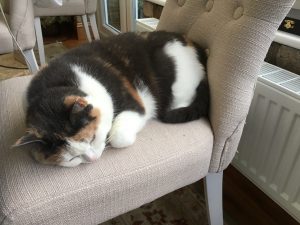 Lindsay
I went to the inaugural Life Lessons Festival at the Barbican a few weeks ago. There, I learned a thing or two from some of the most eminent speakers, doctors, authors and experts from different fields about everything to do with being human. We watched a couple of talks and by far the most impactful for me was Marie Forleo; an American Life Coach whose motto (and title of her book) is Everything is Figureoutable. She gave a talk full of enthusiasm, entertainment and some audience participation that really helped land her point. I came out feeling inspired and empowered!

Steve
I’m loving the Louis Theroux documentaries on Netflix at the moment. The plastic surgery episode, Under the Knife is a particular favourite. His patient, laid-back journalistic style allowing subjects to find their own words is what makes this so absorbing.